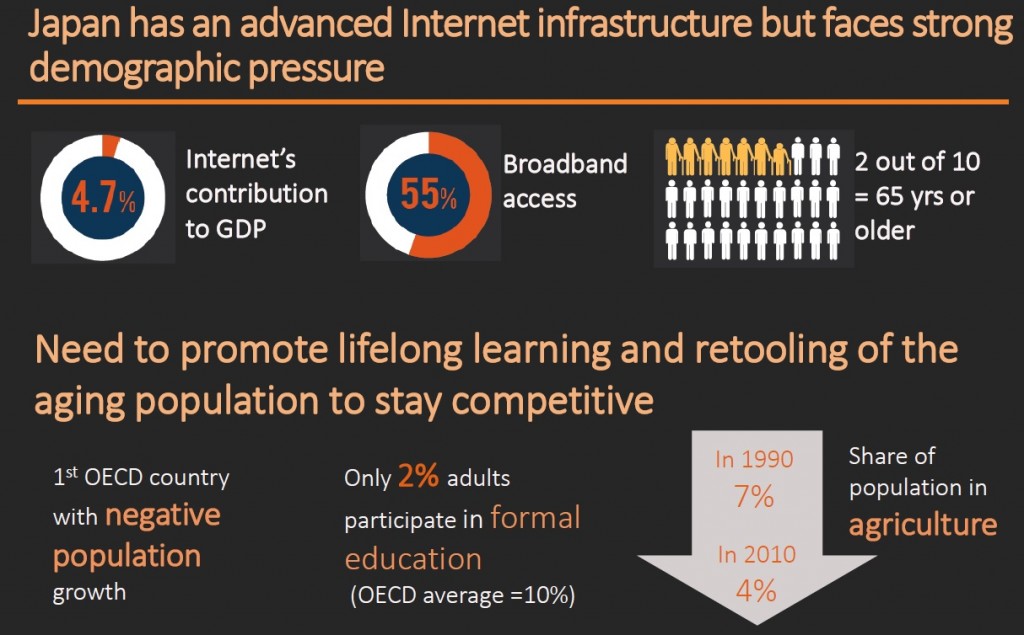 The Internet is becoming an increasingly indispensable part of businesses across all sectors of the economy. However unlike digitally-borne businesses that have been developed specifically around the Internet, many non-tech, pre-existing industries have yet to catch-up with this digitization. These sectors often need a deliberate shift, if not a complete overhaul, in their business processes to reap the benefits that digitization promises. While Japan has a world-class broadband infrastructure, and an educated and skilled workforce, sectors such as education and agriculture seem to be still in the early stage of the digital shift. Competitiveness of these sectors is of vital importance to create resilient society and build future economy. Japan has to take action to address issues such as its negative population growth and declining agriculture, especially with external forces such as the Trans Pacific Partnership looming. Fostering digital enablement in these traditional sectors will be essential to promote growth and innovation, and ultimately improve the competitiveness of Japan’s ageing population.

In the forum on ‘Reinventing Japan’s Digital Economy’ (at Keio University on 24 August, co-organised by GLOCOM and TRPC, co-sponsored and hosted by APRU’s Internet Summer Seminar) we look at examples of traditional sectors from across the region that have gone through, or are in the process of, digital transformations. We will identify and discuss the challenges still facing Japan as it aspires to fully transition towards a digital economy.