European Commission: Study on the Future Opportunities and Challenges of EU-China Trade and Investment Relations 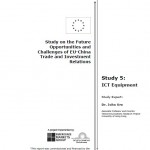 China’s overall electronic and communications equipment industry is, in terms of output, the third largest in the world after the United States and Japan and worth RMB3.84 trillion (US$480 billion) in 2005. In 2004, China became the world’s leading exporter of hightech goods such as laptop computers, mobile phones and digital cameras. However in 2003, Foreign Invested Enterprises (FIE) accounted for more than 90% of all computer exports. China is moving ahead by adopting a macroeconomic perspective on the development of ICT equipment that places an emphasis on consolidating its position as a cheap mass producer for world markets, and identifies areas of opportunity aimed at positioning China’s leading enterprises at the highest value added points on the supply chain. A contender for the top of the list is China’s determination to build wafer fab foundries to reduce dependency upon high-value foreign products and to create the basis for China’s own supremacy in the field of chipsets. This would constitute a h
ighly significant advancement in China’s capabilities in the ICT equipment sector. 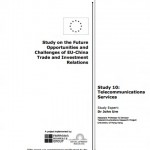 China’s telecommunications market is huge and still growing. Total revenue in 2005 reached USD 79.7 billion with a compound annual growth rate of 15-25%. Growing incomes and accumulation of wealth by China’s emerging middle class has driven consumer demand and will drive the demand for new services such as 3G (3rd generation mobile) and Internet protocol television (IPTV). In the late 1980s, the incumbent fixed line network of the old Ministry of Posts & Telecoms was split into China Telecom and China Mobile. China Unicom, a second mobile operator that was started in the early 1990s by the Ministry of Electronic Industries (MEI)1, is one of China Mobile’s main competitors. here are also fringe players, such as China Railcom and China Satcom which provide retail as well as wholesale services.

High market entry-barriers (see below) make it unlikely that any high levels of competition or cooperation between Chinese and European service providers will take place within their respective home markets. However, direct competition may be found in third markets. This latest development is often viewed more as an opportunity than as a threat. The view of foreign international carriers is that at their current stage of development, China Telecom and China Netcom have too little experience in dealing with the very exacting demands of multinational companies, have insufficient products to offer, lack global all-IP (Internet Protocol) networks that will define the next stage of international telecom services, and lack brand names and the flexibility to compete in increasingly sophisticated markets. What Chinese carriers can offer are services at the commodity end of the market, such as cheap bandwidth and carrier services.