Commentary in TODAY, 6 Jul 2012: Too costly to miss out on fibre, by Lim May-Ann 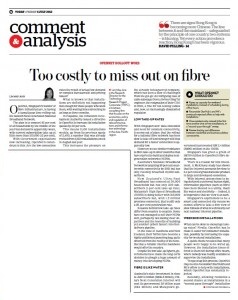 OpenNet, Singapore’s builder of fibre infrastructure, is having a tumultuous time rolling out the nation’s Next Generation National Broadband Network.

The plan is to connect 95 per cent of all households by the middle of the year but demand is apparently weak, with current subscription take-up at little more than 150,000 (12 per cent).

With Government expectations now increasing, OpenNet’s conundrum is this: Are the low connection rates the result of actual low demand or complex bureaucratic and pricing issues?

What is known is that installations are definitely not happening fast enough for those people who want them, with waiting times stretching to as long as three months.

In response, the Infocomm Development Authority issued a directive to OpenNet to increase its installation quotas by 50 per cent.

This means 3,100 installations weekly, up from its previous quota of 2,400, a number that was already revised from 2,050 installations a week in August last year.

This increases the pressure on the already beleaguered company, which has seen a slew of challenges from the get-go: An intriguing case of cable sabotage from a former SingTel engineer, the resignation of their CEO in 2010, a fine for not testing cables and, now, an increasingly dissatisfied regulator.

With Singaporeans’ data obsession and need for constant connectivity, it seems out of place that the rollout for a national fibre network has been slow to take off and stranger still that demand for a faster connection is apparently low.

However, we see similar resistance to fibre take-up in other countries that have started to build and deploy next-generation networks (NGNs).

Australia’s National Broadband Network is targeting 93 per cent countrywide connectivity by 2021 but has only recently breached 10,000 subscribers.

New Zealand’s Ultra-Fast Broadband has connected 50,000 households but has only 500 subscribers (1-per-cent take-up rate). Malaysia’s High Speed Broadband (HSBB) is doing better with 310,000 subscribers but, with 1.2 million premises connected, that is still only a 26-per-cent penetration rate.

Reasons behind low take-up rates differ from country to country. Some have not managed to sell their NGNs well, perhaps by not stating clear objectives and the benefits of building yet another (albeit faster) Internet-delivery pipeline.

In the case of Australia and New Zealand, their NGNs have become a highly politicised punching bag, quite divorced from the reality of the benefits that a reliable Internet backbone would offer the country.

Despite the low take-up figures, governments have made the long-term decision to plough a huge amount of money into developing NGNs.

Singapore has given a grant of S$750 million to OpenNet’s fibre deployment.

There is a reason for this investment. A McKinsey study has shown that the Internet accounts for close to 3.4 per cent of gross domestic product in large and developed economies.

With Internet access close to being declared a universal human right, information pipelines (such as fibre) have been likened to a utility, much like water and electricity – indeed, it is imperative that we view it as such.

Singapore’s aspirations to be a smart and connected city means we cannot afford to take a dim view of slow rollouts of what is technically our next national Internet pipeline.

What can be done to encourage take-up rates? Firstly, OpenNet has to make it easier for consumer installation, possibly by increasing the capacity for weekend installations.

A quick check revealed that many people were happy to be wired up. However, the installation times offered to them fell during office hours, where nobody was readily available to supervise the installation.

To speed up this process, OpenNet may need to reconsider StarHub’s and M1’s offers to help with installations, which OpenNet has constantly rejected.

Secondly, allowing residents a second chance at installations in a “second-pass-through” installation sweep would greatly aid the rollout numbers and would improve the perception of fibre availability.

The cost of the installations is fairly steep (S$220 for high-rise buildings and S$450 for landed property) if you happen to miss the “installation season” for your area, as one of my friends did when she was out of the country.

Finally, there should be a re-look into the cost difference between consumer and business address connectivity. Residential installations begin at S$220 but installing fibre for business addresses costs in excess of S$513, not considering additional network-point connections.

Not only is this two-tier pricing policy overly complex, it has become an abject deterrent to SOHOs (small office, home office), small SME establishments and HDB merchants who initially try to connect at residential rates and then become resentful at facing the higher fee for no discernible difference in use – as OpenNet has discovered.

OpenNet must press on to improve the rate of their fibre installations, with the demand for bandwidth and connectivity set to grow exponentially.

Singapore cannot afford to be without a national broadband pipeline – it is the enabler of the next generation of technological innovation.

Lim May-Ann is the Research Director for the Technology Research Project Corporate (TRPC), a boutique consulting firm that focuses on the economics, policy and regulation of telecommunications and information technology in the Asia-Pacific region.