Commentary on TODAY, 16 Oct 2012: Back to square one on cross-carriage, by Lim May-Ann 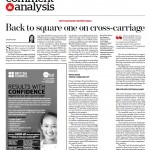 This commentary first appeared in TODAY, Singapore on 16 Oct 2012.

Soccer fans are up in arms again over their access to football matches on Singapore’s pay television channels.

As SingTel has once again clinched a three-year deal with the Football Association Premier League (FAPL), SingTel mio subscribers are rejoicing, while StarHub consumers are left wondering once again if they should switch or suffer an additional TV subscription to watch the matches.

In the meantime, many football fans are asking – didn’t the Media Development Authority’s (MDA) August 2011 cross-carriage rules dictate that content should be available across all pay TV providers?

Not quite. In a nifty manoeuvre, SingTel managed to clinch a non-exclusive deal with the FAPL – meaning that the content falls outside of the cross-carriage rules. Only exclusive content is subject to the MDA cross-carriage guidelines, part of the Media Market Conduct Code.

SingTel has effectively sidestepped the cross-carriage issue with a non-exclusive deal, and what consumers are waiting for is to see if StarHub signs a deal with the FAPL, and how much it will cost compared to SingTel mio TV.

This one-upmanship is not healthy for the industry, and the resultant offering war will mean duplicate content being offered by both providers, and ultimately costs being passed on to consumers.

WHAT DOES CROSS-CARRIAGE DO?

Cross-carriage of content allows content from one provider to be accessed by another provider’s subscribers. This means that StarHub subscribers who want to watch exclusive SingTel mio TV content – such as soccer matches – could request to do so.

According to the MDA, the cross-carriage rules were meant to create a “vibrant pay TV market to the benefit of consumers and industry”. By allowing content to be cross-carried, consumers would not be “locked in” to a single pay TV provider, and could use one set-top box to access all content available in the market.

Given that the subscriber pool was no longer a zero-sum game for providers, pay TV operators would be free to explore complementary programming to the benefit of all viewers.

The first use of the cross-carriage rules was this year’s UEFA EURO broadcasts – StarHub had obtained exclusive broadcast rights to EURO 2012, and was charging its own subscribers a S$58 package to watch the matches. SingTel mio TV subscribers could also access the broadcasts at the same amount, plus a S$10 administrative switch-on fee.

Unfortunately, this recent move by SingTel shows that pay TV providers are still reluctant to cross-carry content. This could be for a number of reasons.

For one, providers have to negotiate for cross-carrying in its broadcast and licensing agreements, making discussions more onerous, and thus limiting innovation and creativity in obtaining content.

Secondly, the cross-carriage rules interfere with channel bundling strategies as it would set pay TV providers down the path of having to radically change their method of charging for content, which is currently being marketed in channel packages. Cross-carriage forces providers to decouple their channel bundles, and charge for a la carte, single-channel access.

The cross-carriage rules need some refinement if they are to truly benefit consumers and providers – and closing the “exclusive content only” loophole is not the answer. We need to find a way to balance the desire of having the largest amount of content available to all consumers, with the economic pressures on pay TV providers.

One possible way is to tweak the current cross-carriage rules to create a new band of pay-per-view, cross-carried content which pay TV operators could offer channels on.

This method of access would give operators the option of negotiating for cross-carried content with upstream content providers if they felt that the content would garner an audience beyond their subscription base. So for example, SingTel could have negotiated for a non-exclusive, cross-carriage deal with FAPL, and leaving StarHub free to negotiate for other complementary content.

The total cost of carrying content would be shared by all pay TV providers, and customers have access to more channels as a result.

In this current litmus test of MDA’s amended rules, unless StarHub signs a deal with the FAPL, it remains to be seen what recourse soccer fans will have but to subscribe to SingTel.

Lim May-Ann is the Research Director for the Technology Research Project Corporate, a boutique consulting firm which focuses on the economics of telecommunications and information technology in the Asia-Pacific.