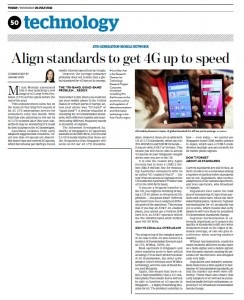 M1 last Monday announced that it was launching a new range of 4G Long Term Evolution (LTE) service plans before the end of the year.

This announcement came hot on the heels of rival SingTel’s launch of its 4G LTE smartphone service for consumers early last month. With StarHub also planning to roll out its 4G LTE network later this year, subscribers may be wondering if it could be time to jump on the 4G bandwagon.

Anecdotal evidence from early adopters suggests that it could be. Users rave that 4G speeds are discernibly faster than our current 3G speeds, which fared below par during a recent mobile Internet speed test by Google.

However, the average consumer probably does not realise that a global standard for 4G has yet to emerge.

Remember a time when you could not use your mobile phone in the United States or certain parts of Europe unless your phone was “tri-band” or “quad-band”? A similar situation is emerging for 4G transmission standards, with different regions and countries using different frequency bands to transmit 4G signals.

The Infocomm Development Authority of Singapore’s 4G spectrum auctions in the 1800 MHz, 2.3 GHz and 2.5 GHz bands implies that these are the frequencies that Singapore will settle on for our 4G LTE transmissions. However, these are at odds with US 4G LTE standards, which use the 700-800 MHz and 2100 MHz bands – if you are with AT&T or Verizon. This means you will not be able to access 4G speeds on your Singapore-bought device once you are in the US.

It is also the reason why Apple recently had to bear a US$2.2 million (S$2.8 million) fine for misleading Australian consumers with its so-called “4G-enabled iPad 3” – the new iPad can access 4G signals on the US bands but Australia’s Telstra runs 4G in the 1800 MHz band.

If you are a frequent traveller to the US, you might be thinking of buying a US 4G phone to circumvent the problem – but guess what? Different operators have been assigned different parts of the spectrum. This means that if you buy an AT&T 4G-enabled phone, you cannot use a Verizon SIM card in it, as AT&T operates within the 704-746 MHz band, while Verizon uses 746-787 MHz.

GSM VS CDMA ALL OVER AGAIN

The icing on top of the complex layers of 4G cake is this: 4G also comes in a number of transmission flavours such as LTE, WiMax, HSPA, etc.

Most operators in Singapore and other countries seem to have settled on using LTE as their preferred mode of 4G transmission, but other early-adopter telco’s rollouts used WiMax technology, as in the case of South Korea and Malaysia.

Again, this means that there exists a high possibility that a 4G-enabled phone from South Korea will not be able to function at 4G speeds in Singapore – a highly frustrating situation for all. The problem is similar to how – even today – we cannot use Singapore-band GSM mobile phones in Japan, which uses a CDMA (code division multiple access) network for its mobile phone signals.

Current standards are still in flux, as there needs to be a consensus among a number of parties before standards can be set: Regulators, who oversee assignment of the national spectrum, and telco operators, who broadcast 4G signals.

Regulators have taken the bold step of announcing 4G spectrum auctions and telcos have rolled out their subscription plans. However, regional harmonisation for 4G standards has yet to settle, which means that early adopters will very likely be penalised if transmission standards change.

Regional harmonisation is extremely important as it ensures the quality of standards is still met when consumers roam to the edges of domestic coverage, or else one gets interference when nearing another country.

Without harmonisation, countries could transmit different media (such as a radio signal and a mobile signal) over the same channel, making the potential for interference and dropped calls very high.

Regulators and industry associations must move a little quicker to harmonise 4G transmission standards, so that the market can work more efficiently. Telcos must also ensure that early adopters of 4G will not be penalised too badly for their enthusiasm, especially if 4G broadcast transmission bands change.

Lim May-Ann is the Research Director for Technology Research Project Corporate, a boutique consulting firm that focuses on the economics, policy and regulation of telecommunications and information technology in the Asia-Pacific region.