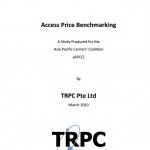 1. This report follows similar APCC Access Benchmarking reports in 2003 and 2006. This report covers 14 economies, two more (Japan and Vietnam) than the 2006 report. The economies are:

3. The prices reported are not list prices but the prices actually paid by the seven respondent international carriers. However, it is not possible to judge from the data how representative overall they are of any particular economy. Clearly the actual prices will be influenced by, among other factor, discounts for bulk-buying and for strategic marketing purposes.

4. When making an assessment of price changes it is important to bear in mind changes in dollar exchange rates and local rates of inflation. This report on occasion uses deflators to translate from 2009 current or market prices to constant or real 2006 dollar prices for comparison purposes. A table of deflators is provided in Table 2.1.

5. The prices used for comparative purposes 2006-2009 are simple averages across all bitrates of leased circuits. This follows the practice of the 2006 report. There was insufficient data to weight these prices according to the number of circuits used in each bitrate category, but from the returns received it would seem that the outcome would show little difference.