Droning On, and On

From the postal stage coach to the telegraph, to the telephone, to the Internet it’s been a long haul, and each step of the way has required changes to laws and regulations. Today the main challenge arises over jurisdiction. Social media in particular crosses national boundaries, making the application of national laws problematic to say the least. At issue are areas such as defamation, hate postings, terrorism, child pornography, cyber crime such as theft or extortion, drug peddling and many others. Dealing with these cross-border illegal activities depends upon at least three things being in place. First, national laws that have been updated to cover such activities. Second, similar laws in the countries from which the perpetrators are operating. And third, cooperation across these jurisdictions. None of these conditions can be assumed to exist, and where similar laws have been enacted, they may not be in harmony with each other. There is no question this situation helps criminals and wrong-doers evade the law.

There are various steps states can take. In light of its global status, the USA regularly attempts to apply its laws with extra-jurisdiction. Other states feel less able to do this, but they can seek extradition where treaties have been agreed. For example, Interpol and national police forces do seem to cooperate somewhat effectively in closing down child pornographers. But economic crimes seem to be even more difficult to tackle, not least because of the jurisdictions criminals choose to operate from. Compounding these difficulties of detection, prosecution and prevention is the use of hide-and-seek tactics used by criminal gangs, including the ‘Onion Routing” of the TOR, which can be used for legitimate purposes also.[1] And thus, as it is with most technologies, they are double-edged. And the secret of detection mirrors the secret of surreption, which remain undetected for as long as possible and thereby gather intelligence.

But democracies are having headaches over the use of surreptitious tactics by state and law enforcement agencies. Both the US Appeals Court and the US House of Representatives have voted against the wholesale collection of telephone meta-data by the National Security Agency (NSA) which does not record what was said but who called who and when. Of course, in the era before Big Data and Hadoop, this could have been a blessing in disguise for the NSA, but with advances in data analytics algorithms the cost of not collecting all the data may rise. What cost, and how to cost, the protection of a free and open society?

Drones are the latest example of an ICT development that poses serious questions. In the US, the Federal Aviation Authority (FAA) has given blanket permission for the commercial use of unmanned aircraft below 200 feet,[2] but in 2014 a court found that the authority of the FAA does not extend to radio remotely-controlled model-aircraft such as a drone.[3] This raises the question when and what exactly is a ‘model’? According to design or to usage? Equally it poses a problem for house owners such as residents in landed properties who previously could assume that the space above their roof-top and gardens, up to 500 feet, was their own.

A drone hovering tens of feet above a lawn might be considered somewhat intrusive, especially when fitted with a telescopic lens, and who knows, the National Rifle Association (NRA) may yet seize on the opportunity and advocate shooting them down. The wonderful thing for lawyers is that each law transgressed can be another law upheld. 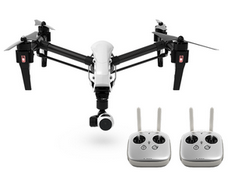 This light weight model will set you back over $3000.

In Singapore, where most people live in clusters of public or private high-rise apartment buildings, similar concerns were recently expressed in Parliament when the Unmanned Aircraft (Public Safety and Security) Bill was introduced. Safety was the biggest concern, with privacy issues seemingly being left to existing laws. The aim is to strike a “judicious balance” between regulations and commercial innovations. 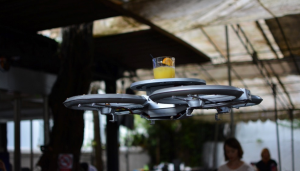 One commercial trial that caught the news headlines was at the Timbre @ The Substation restaurant [4] using drones developed by Infinium Robotics.[5] It would seem that it won’t be long before some high-flyer starts-up a ‘drone-to-home’ food delivery service. But will it be 100% accurate in finding the correct addresses? Delivering a hot Lamb Vindaloo curry to a vegetarian household may not go down too well. It might indeed get a chilly reception. On the other hand, with a ‘phone-a-drone’ mobile hotline complaints app available, the dissatisfied customer will always have the chance to, yes you guessed it, drone on and on about it.

This is a third working paper in a series of on Decarbonising Public Transport in Hong Kong. View part 1 and part 2. This paper arises from discussions of the Environmental Interest Group (EIG) of the Inter-Modal...